Giving Our Kids Custody of the Home 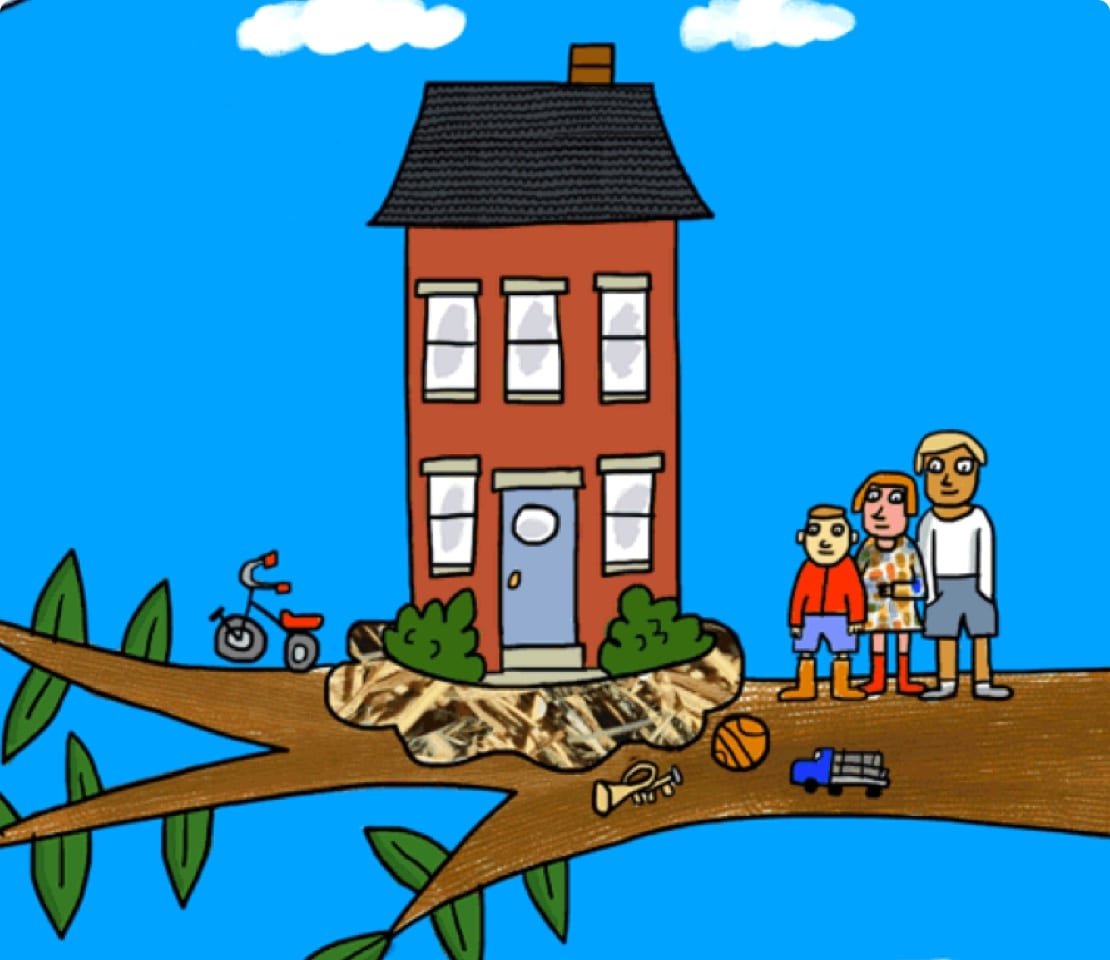 After Divorce, Giving Our Kids Custody of the Home

The Fourth Grade Parents’ Night Out is in full swing. These grown-ups only gatherings, potluck style with plenty of cocktails, are a tradition at my sons’ school. A new couple introduces themselves and we make small talk over glasses of wine while I wait for the inevitable question.

There it is, from the wife, looking around the room: “Who’s your husband?”

We’re divorced, I explain. He’s with the boys tonight.

We live in a traditional, smallish Midwestern city. Midwesterners are not big on sharing. Getting too personal makes us very nervous. Most often, as soon as I say divorce the conversation is quickly changed to a less embarrassing topic. So… how ‘bout those Colts!

But the wife leans in, curious. “So do the kids live with you? What’s your arrangement?” (She must not be from around here, I muse.)

I roll into my pitch. Not that I’m trying to sell anything. I’ve just found the more succinctly I state it, the easier it is for others to digest (hand gestures help).

“Our living arrangement’s kind of unusual. The boys stay in the house [hands together in front of me, fingertips touching like I’m holding a big snowball] and their dad and I have separate apartments [right hand out to the side; then left hand]. We move in and out every week [right in; then move left hand in, while moving right out] to take care of them,” [back in front holding the precious snowball].

I stop flopping my hands around and wait for a reaction. The shocked silence and confused expression, I’m used to. Her eyes welling up with tears? That’s new.

What I’m describing is called “bird nesting” or “nesting”. It’s based on the idea of the kids being like baby birds and the mother and father birds flying in and out of the nest to take care of them. This means, in non-ornithological terms, that after a divorce the kids continue to stay in the family home while the parents take turns moving in and out.

In our case, my ex and I each have our own apartments where we live when we’re not in the house with the boys. We switch into the house on Wednesday mornings and Saturday evenings. The boys and all their stuff — clothing, homework, sports gear, musical instruments, and piles of beloved childhood detritus in their rooms — stay put.

I read about the idea in Laura Wasser’s great book, “It Doesn’t Have to Be That Way: How to Divorce Without Destroying Your Family or Bankrupting Yourself.” Nesting struck a chord with the boys’ dad and me. We hoped keeping the routine of daily life as consistent as possible would give continuity as we figured out what divorce would mean for our family. Of course, changes were going to come. We hoped if their day-to-day life didn’t feel that much different, it could temper the fear and uncertainty.

When we sat them down to tell them we were getting a divorce – they were 12, 9, and 5 at the time — the very next thing we said was: But nothing’s changing for you. You’re will keep living right here.

We presented it with familiar scenarios: It’s like when Dad goes on a business trip for a few days and Mom takes care of you. Or when Mom goes to see her friends and Dad’s in charge.

When we were divorcing nesting was almost unheard-of, at least in our part of the country. Anita M. Ventrelli, former chairwoman of the American Bar Association’s family law section, said she recalled the concept surfacing about 10 years ago, but she did not think anyone was keeping track of how common it is.

“Nesting isn’t really something that’s in the divorce statutes,” she noted. “It’s a solution that creative lawyers and parents have developed to address concerns about moving kids. It’s often agreed to outside of court — a creature of settlements, not something that Judges would likely order.”

Describing it to our lawyers, therapists and financial adviser took some explaining and forced us to answer some tough questions. Telling family, friends, and the boys’ teachers, required clarifying and repeating (hence the elevator-pitch-with-hand-gestures).

The most frequent question? How long are you going to do that?

The best answer we could come up with was, I don’t know. I guess until we decide not to?

We’re moving into year three, and our answer is still the same.

Which is not to say it’s easy. There are hassles, for sure – shared space, finances, and keeping track of my own stuff between the house and my apartment.

For couples consider nesting, Ms. Ventrelli, a senior partner at Schiller DuCanto & Fleck in Chicago, suggests three questions: “Is this something my ex and I can both agree to do? Can we each find somewhere else to live when not in the nest? Can we work together to share and care for the nest?” If you can’t say “yes” to all of these, Ms. Ventrelli cautions, “You may find challenges of nesting make it unsustainable, though it could serve as a short-term solution until the divorce is settled.”

Nesting isn’t necessarily the answer for everyone. But there’s no reason the traditional post-divorce scenario has to be the go-to solution, either.

So many memories live in a family home. The boys continuing to live there – and all of us crossing paths there regularly — is a constant reminder to all of us. While our narrative is ever-changing, we were and always will be our version of a family.

As for my new friend at the school party?

“Oh my god, if my parents had done something like that, it would have made such a difference,” she says, wiping her eyes and glancing with embarrassment from her husband to me.

“It was 30 years ago but I will never forget my little sister sobbing uncontrollably every time we had to move houses. It was awful.” Her eyes tear up again. “I’m so sorry I’m getting so emotional!”

“That’s O.K.,” I say, my eyes welling up, too. “You just made me feel like what we’re doing might actually all be worth it.”

Beth Behrendt is a freelance writer in Fort Wayne, Ind., working on a book about nesting.

Giving Our Kids
Custody Of The Home

View More of My Work
Login to Beth Behrendt | Freelance Writer, Author, & Nesting Mom
Reset Password
Enter the username or e-mail you used in your profile. A password reset link will be sent to you by email.