Divorced Couple Turns to Nesting for the Kids 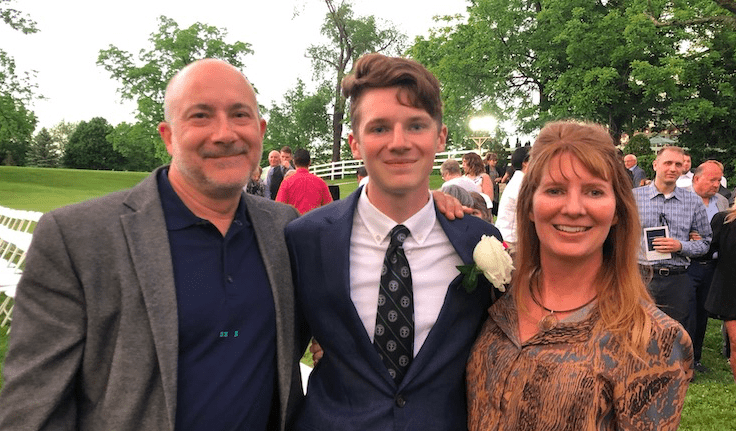 Divorced Couple Turns to Nesting for the Kids

Our interview for The Journal-Gazette

Bill and I, and our son, Jack, were interviewed for our local paper’s first article about nesting. It was also the first time Jack has been interviewed on this topic. He did us proud!

Read the article on the newspaper’s site, or read on for the full text below. –Beth

Six years ago, as Bill DeSalvo and Beth Behrendt were telling their three boys they were getting divorced after being married almost 18 years, they said most things about the boys lives would not change. The Fort Wayne mom and dad promised they would be making the biggest adjustments.

The family would attempt a then little-known technique called “nesting,” where the children remain in their home and the parents would alternate moving out on a somewhat regular schedule.

“At the time it was a scary thing, obviously,” said their oldest son Jack, 18. “Knowing that we were going to stay in the same house was nice. Our lives were going to be different but not extremely so, and that was nice to know.”

At the time, the boys were 5, 9 and 12. While researching ways to make divorce easier for children, Behrendt read the book, “It Doesn’t Have to Be That Way” by Laura Wasser, which briefly mentioned nesting.

“I couldn’t find anything else about it, so I just kind of made it up as we went along,” said Behrendt, a freelance writer who has been published in the New York Times and appeared on “Good Morning America” to talk about nesting.

Now, through her website familynesting.org, she’s become a resource for divorcing couples. Behrendt, 51, is also writing a book about the process.

“A big worry was what are we teaching our kids and how are we going to divorce and not mess them up?” she said. “We needed to divorce, but doing it this way took a lot of feelings of shame away from our kids.”

DeSalvo, 54, could have blown up the idea and forced his sons to shuttle between houses. Instead of embracing the drama, he considered Behrendt’s idea with an open mind, saying he always respected her opinion about life choices.

“It made sense and it still makes sense,” said DeSalvo, who works for a cloud-based internet service. “I’m a pretty analytical person, and I didn’t reject it outright because I could immediately sense there was a financial advantage, but we had to work through the numbers. I was a little skeptical, and I read through the literature. As to whether or not my kids are going to be better off in the long run, we’re betting they are.”

Instead of continuing the battle over differences that created the divorce, the couple focused on helping their sons adjust and find normalcy. He maintained the master bedroom at the house, while she used one in the basement. For the first six months they even co-rented an apartment, though never present at the same time.

They learned to work together better, first setting up rules for when to text, email or call, how to avoid being manipulated by the boys and figuring out what patterns worked best.

They also looked long-term, realizing they were always going to be in each other’s lives at birthday parties, school events or athletic competitions now, or at weddings, baptisms and birthday parties in the future. They had to learn to be in the same space for their children.

“I never wanted a situation where having both of their parents present was going to cause them any tension,” Behrendt said. “That would break my heart. Bill and I feel that family is really strong to us, but yet we’re divorced. I just would hope that it’s OK to be creative about your approach.”

In fact, it’s common for both to be in the house for special occasions such as family dinners, Christmas, birthday parties or even if they simply have free time and just want to see their sons. A few weeks ago, Behrendt came over to cook everyone dinner then slept over in her bedroom.

Behrendt and DeSalvo usually talk every day by phone, and they credit each other for becoming better parents than they were before the divorce.

The boys have many friends whose divorced parents use a traditional method of trading their kids and their stuff from house to house.

“They think it’s really cool that we can just stay in the same house,” Jack said. “When the divorce first happened, I’m sure it was really rough for them, but being forced to put us first has been really beneficial in the long run.”

The parents’ relationship continues to get better as they stay focused on the boys.

“At first it was hard, but what worth doing isn’t hard?” DeSalvo said. “If people think it’s easier to just get a divorce and hate somebody, well, that’s hard, too.”

There’s also potential complications when the parents start dating, and both are involved in long-term relationships with people who support nesting.

“I think you need to explain it early on in the dating relationship,” Behrendt said. “You don’t want to surprise them, and you have to be very clear that you’re not doing it because you are trying to keep your marriage going, but for the kids. I saw it as a way to weed out people pretty quickly. If somebody can appreciate it and have questions and want to understand it, that’s a good indication they can appreciate what your kids mean to you.”

As DeSalvo said, “Having a relationship with somebody who tries to understand makes a world of difference and makes things a lot easier. It makes caring for the kids easier, my job easier, everything.”

Everyone, new partners included, showed up to celebrate Jack’s graduation from Canterbury High School last spring. There’s no rivalry or trying to one-up the other parent or wishing the kids preferred one over the other.

Currently, no one knows when the nesting will end as Mick is 15 and Max, 11, while Jack attends Carthage College in Kenosha, Wisconsin. There will be a point when it doesn’t make sense, but now it does.

“We have both had times where we thought, ‘Is this worth it? Would it be easier?’” Behrendt said. “Then we’ve both said, ‘Then who is going to suffer? It’s going to be the boys, and that doesn’t seem right, and I’ve got to get over what my issue is.’”

Both parents believe this is best for their sons and are proud of what they are accomplishing.

“My gut tells me that my kids are well-adjusted and they are going to do fine in life,” DeSalvo said. “They’ll encounter ups and downs much like anybody else will, and maybe this will help them. I think it helps them to see what it means to handle large problems with some elegance.”

But would they do it again?

“If affecting your kids’ lives is something you are worried about in a divorce, then nesting should be an option you look at,” Jack said. “Divorce isn’t fun for anybody when you are a little kid, but looking back on it now, I would not change anything. I think this has been really good for our family.”

“Looking back on it now, I would not change anything. I think it has been really good for our family.” — Jack

You might also like
One of these great reads
Reflections: Honoring Our Family’s History
How 8 Books Changed My Life
Nesting After Divorce Can Save You Money

“Birdnesting: The Pros and Cons” for The Plum

The Divorce and Beyond Podcast: Episode 135